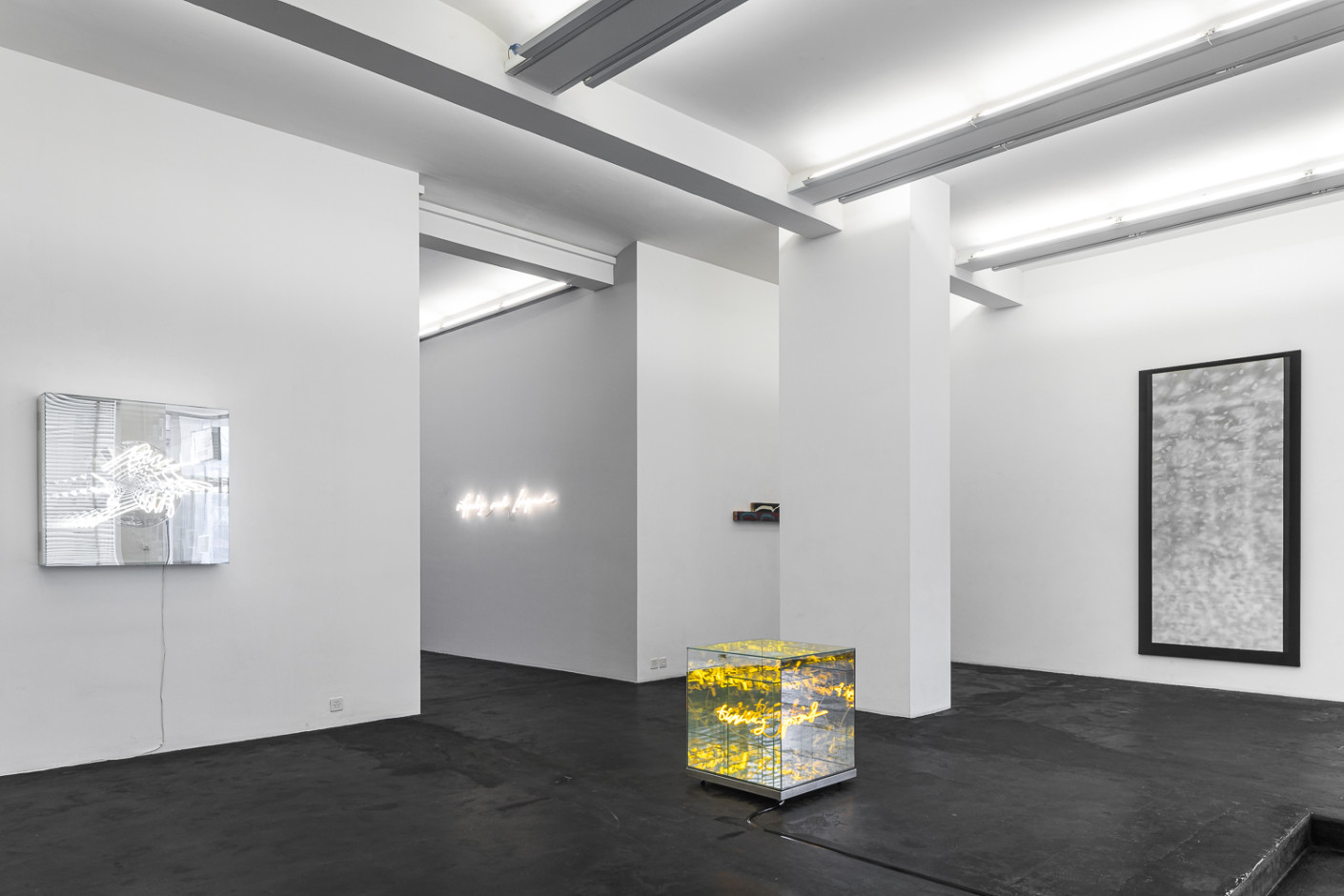 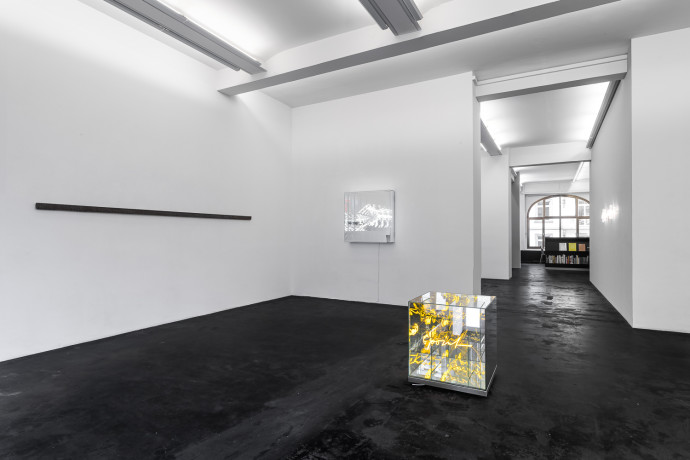 We are pleased to announce the second exhibition in the new «Dialogue» series. With Brigitte Kowanz's objects and Michael Venezia's paintings, we unite two positions that reveal in very different ways the attraction of the medium of light and its ways of interaction.

The double exhibition by Brigitte Kowanz and Michael Venezia is the second of our new format, in which we put two or more artists in «dialogue» on a specific artistic topic. It may come as a surprise that we are combining the two very different positions under the theme of «light». On closer inspection, however, it becomes apparent that the early paintings by Michael Venezia, in particular, live strongly from the interaction with their ambient light, and that some light objects by Kowanz contain painterly moments.

Brigitte Kowanz is one of the most important international representatives of light art. The combination of light and language into memorable pictorial formula is a main feature of her work. Kowanz often uses reflecting surfaces too in order to increase the magic attraction of light, for example in the new «Reflects»-series that gives a very painterly impression: Consisting of aluminum, reflective tape and transparent varnish, the panels reveal gestural movements, the reflection of which changes depending on the incidence of light and the position of the viewer. In addition to such interactive moments, Kowanz often uses reflection to emphasize the statement of a work, like in the floor sculpture «Tipping Point»: in general, the expression refers to a tilting moment in a previously uniform movement, but today is often related to our planet’s climatic changes – a fatal fact that Kowanz visualizes by combining neon letters and mirrors in an almost dizzying way.

In addition to other current works by Kowanz, we are particularly pleased to present a piece from the 1990s which, made of incandescent lamps and distribution plugs, illustrates the beginnings of her engagement with the medium of light.

Our selection of works by Michael Venezia concentrates primarily on his artistic beginnings, transferring the public to the period of the late 1960s and early 1970s. At that time, Venezia shared with artists like Dan Flavin, Robert Ryman or Sol LeWitt the desire to develop options of painting after Abstract Expressionism. Around 1967, he was one of the first visual artists to discover the paint spray gun, which almost eliminates the handwriting of the brush stroke and instead makes air pressure visible. By filling his spray paint cans with a mixture of metallic pigments and acrylic or oil paint, Venezia clearly challenged the painterly quality of light: in our exhibition, the works on paper for example change optically, depending on the incidence of light, and thus receive a dynamic that arises entirely from the interplay of painterly means and light.

This aspect becomes even clearer in the elongated canvases, called «bars». The extreme horizontal expansion of the picture surface, to which he has remained true to this day, was another important step in the early 1970s by which Venezia provided new impulses to the traditional medium of painting. With a single, long spray and moving alongside the «bar», the artist «painted» the narrow canvas. The viewer too is required to move in front of the painting in order to experience the whole variety of light play unfolding on this surface. A similar effect is reached when the artist uses pearlescent paint in newer «block paintings».

In addition to the fact that light is the basis of our perception, our second «Dialogue» exhibition shows how light always serves artists to create interaction with their viewers, thus providing them with a very physical experience of art. 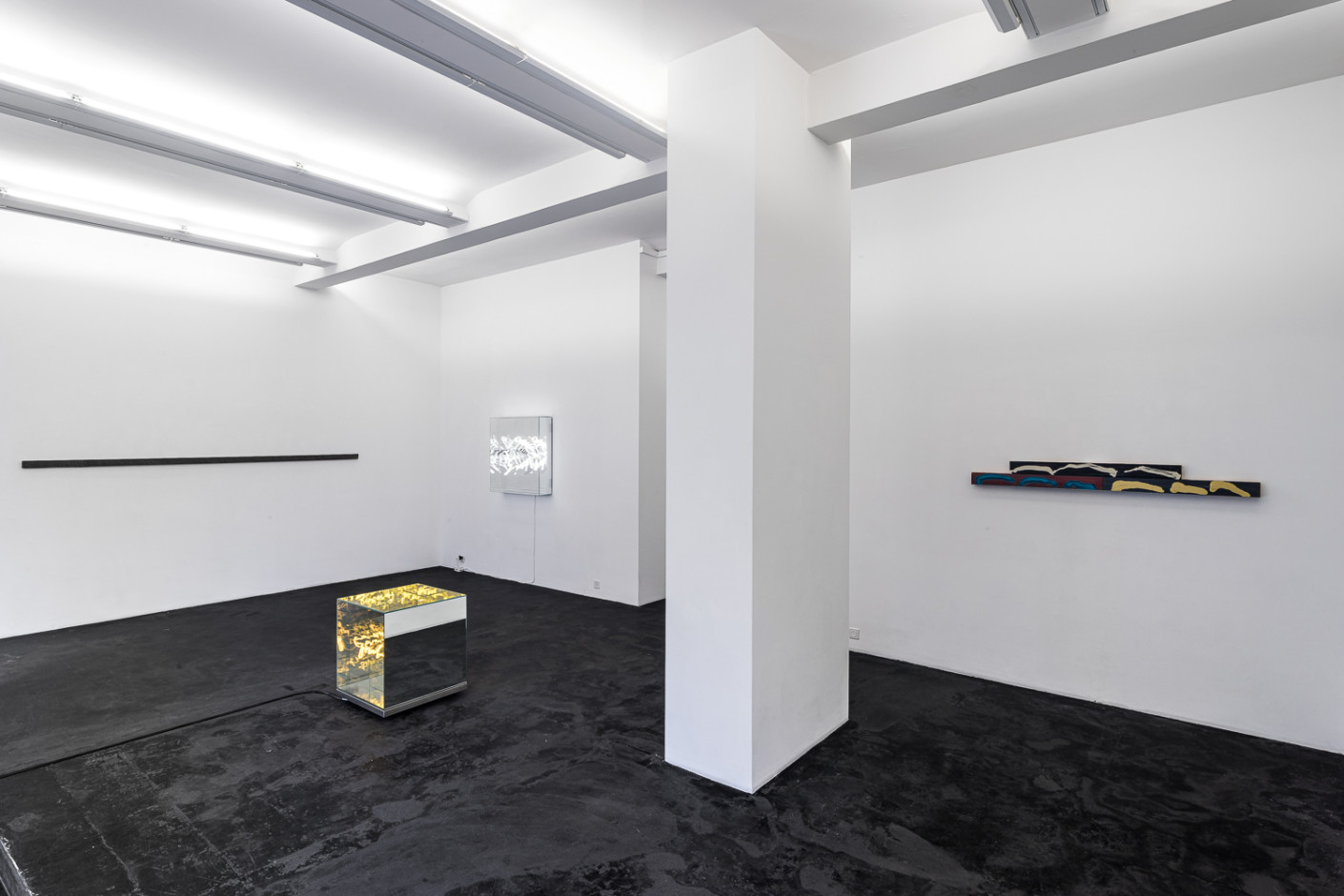 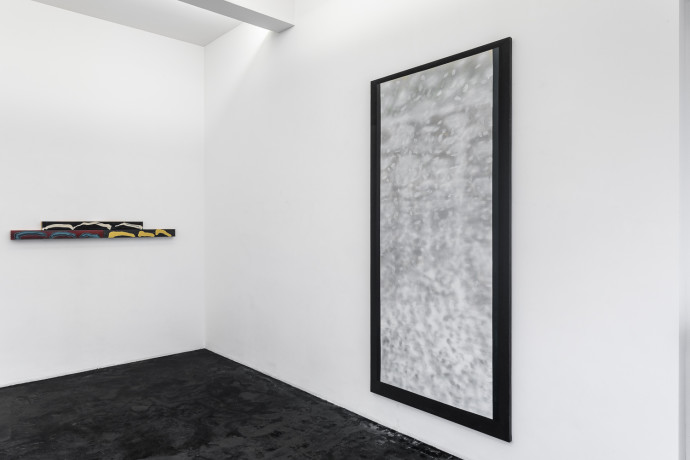 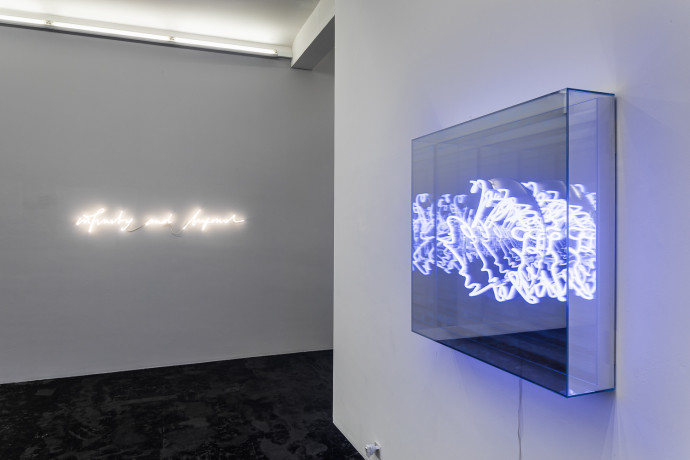 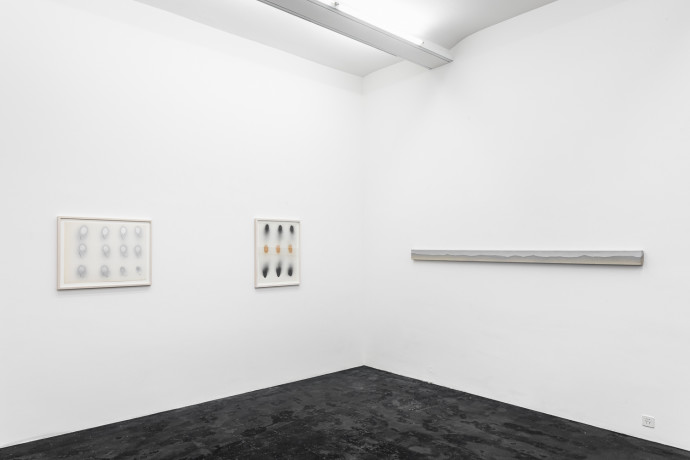 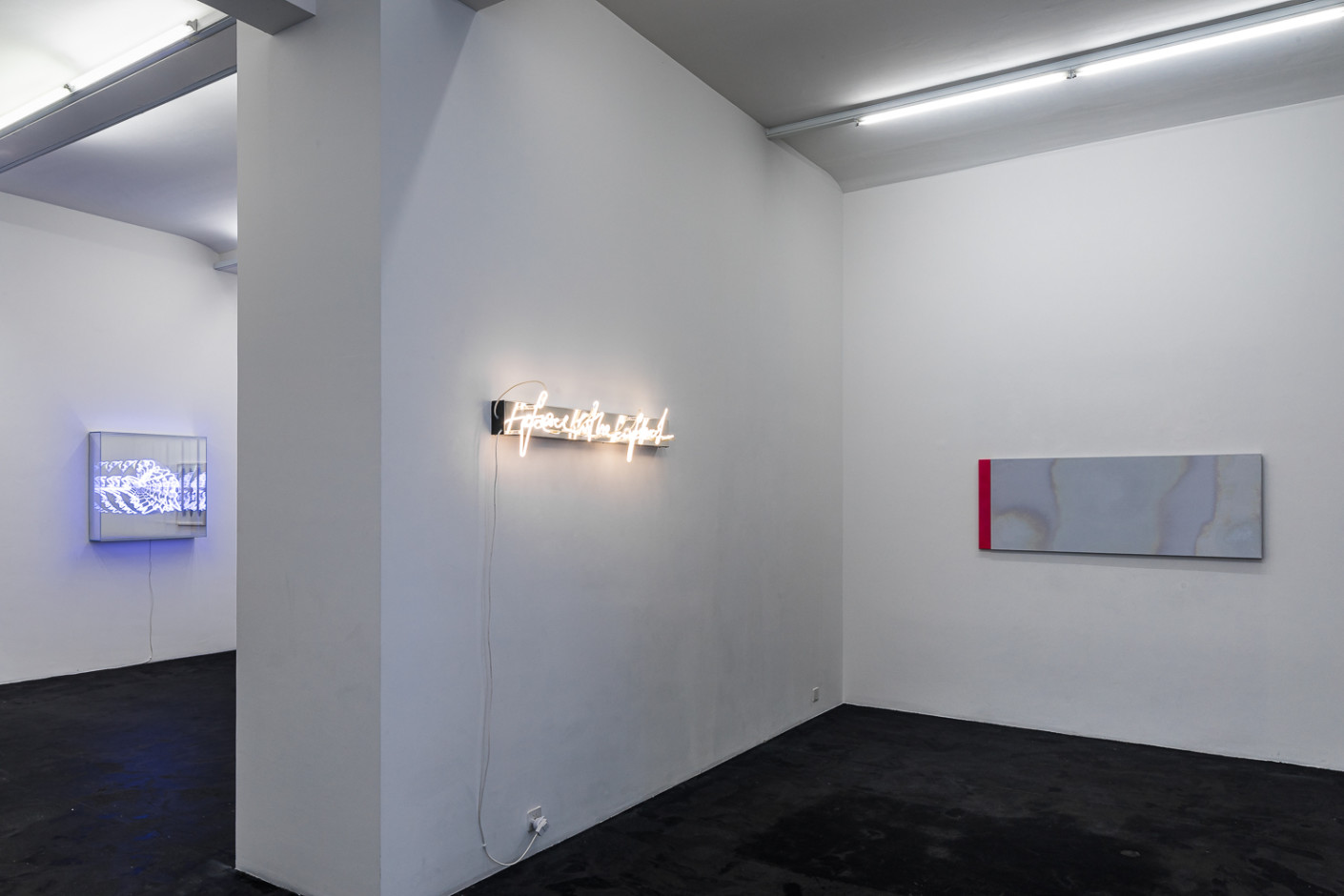 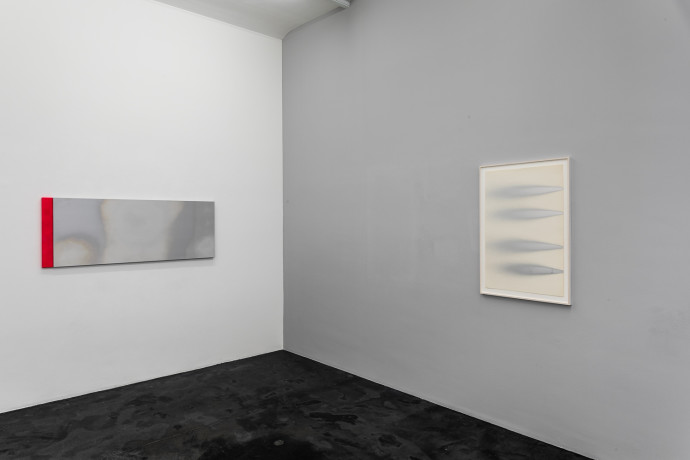 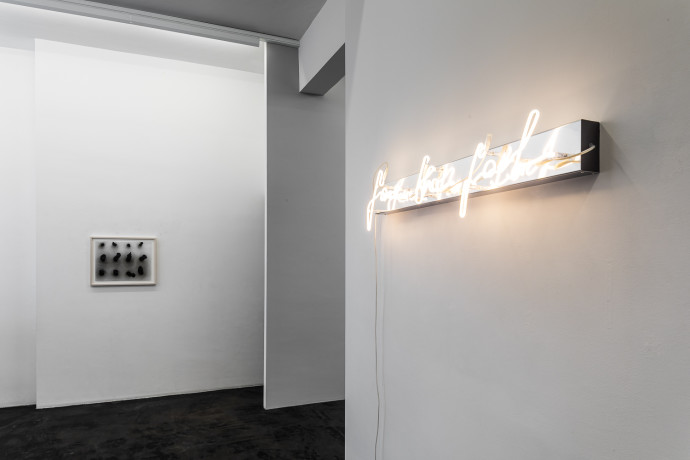 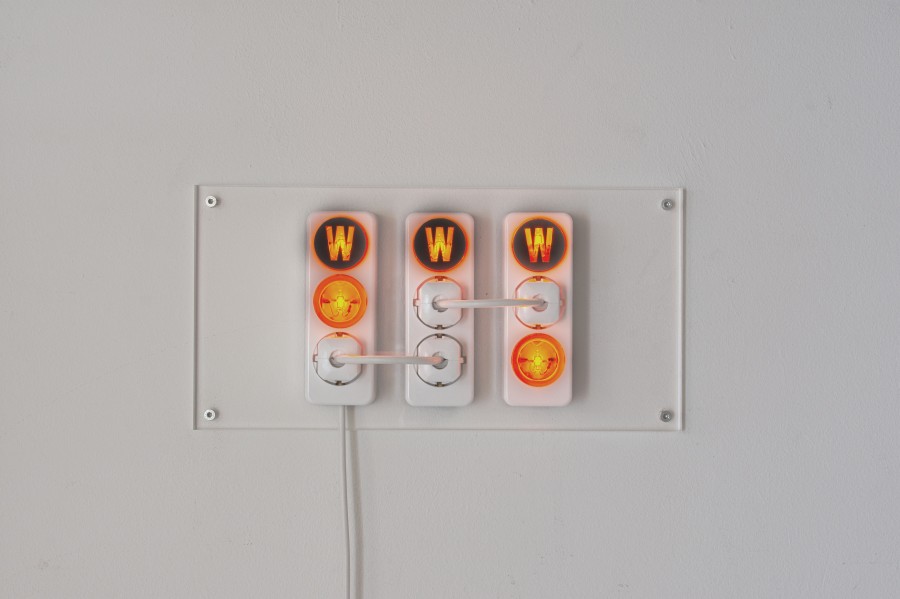 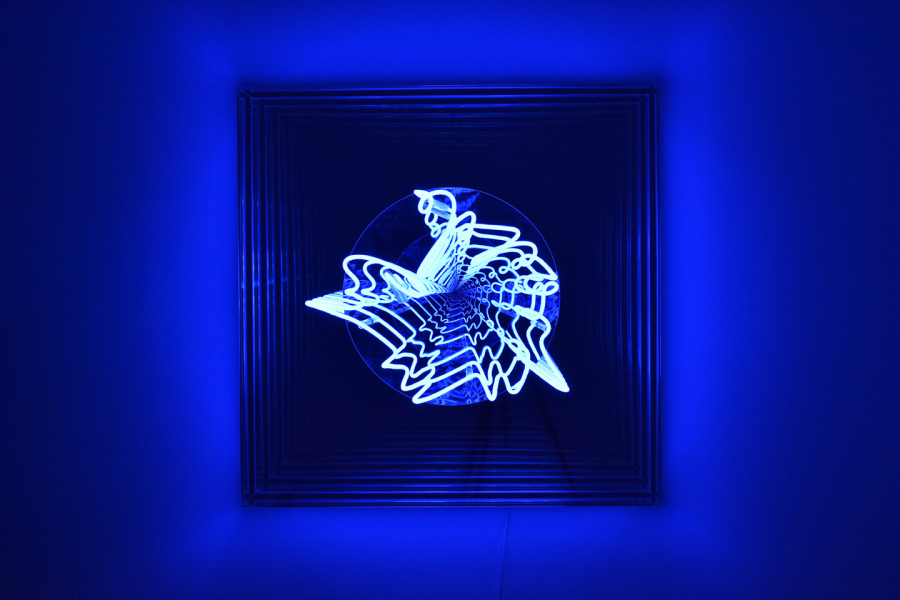 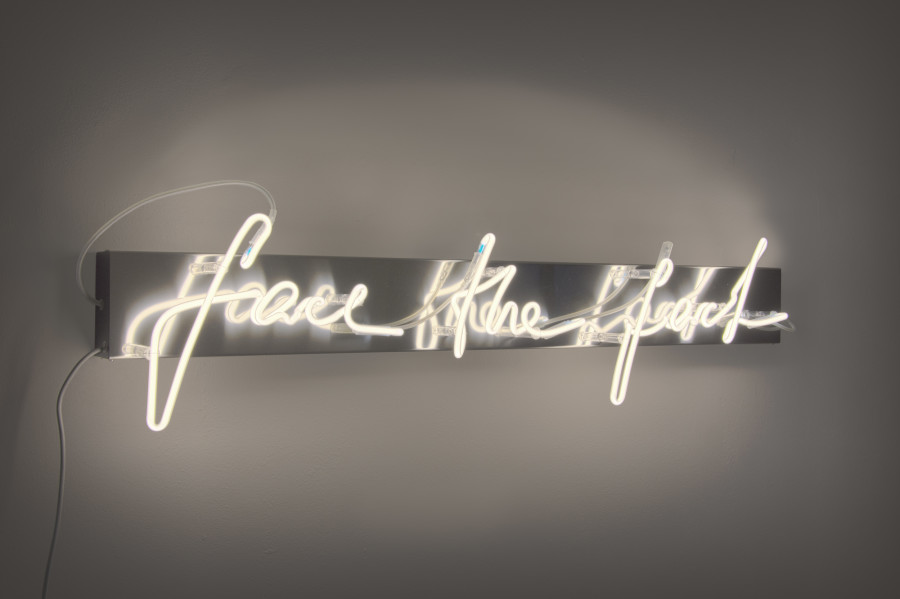 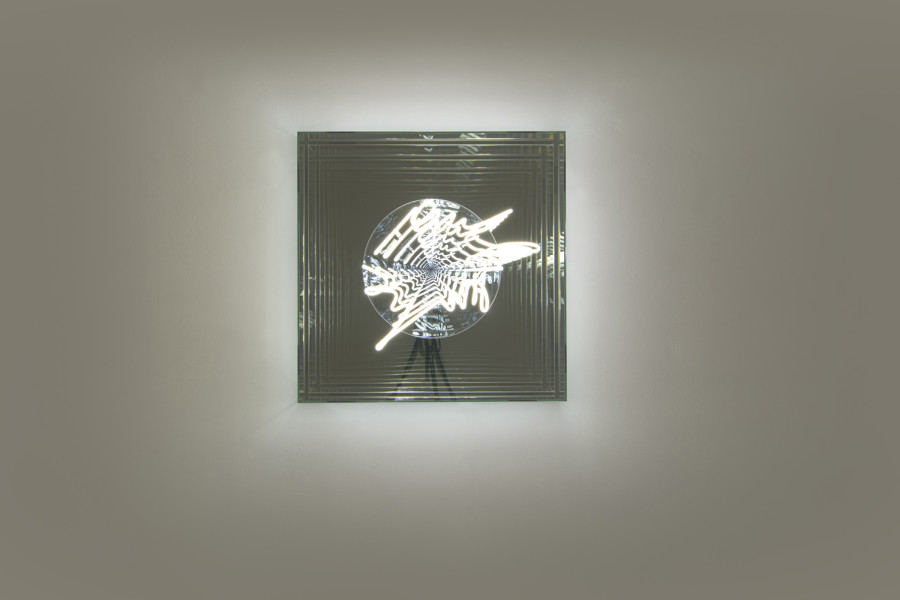 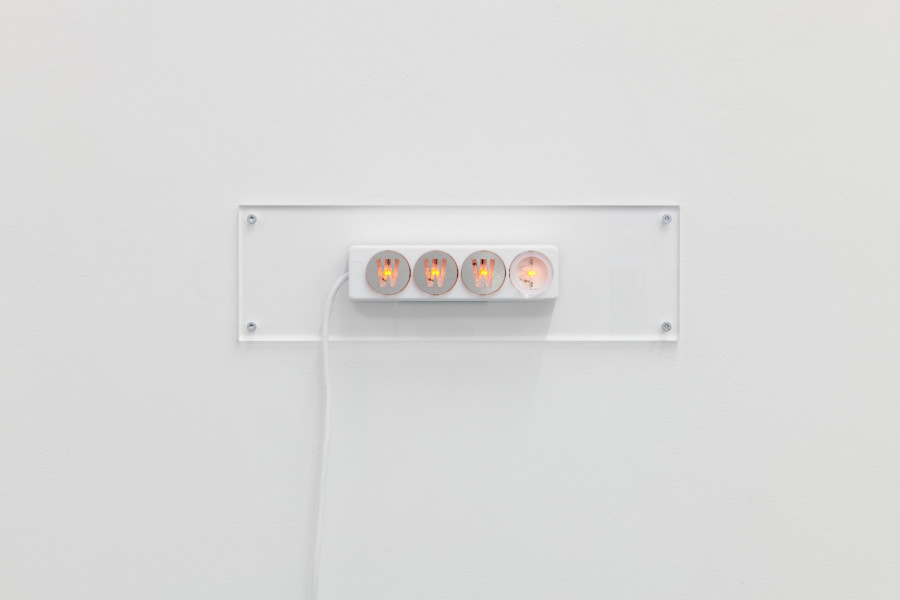 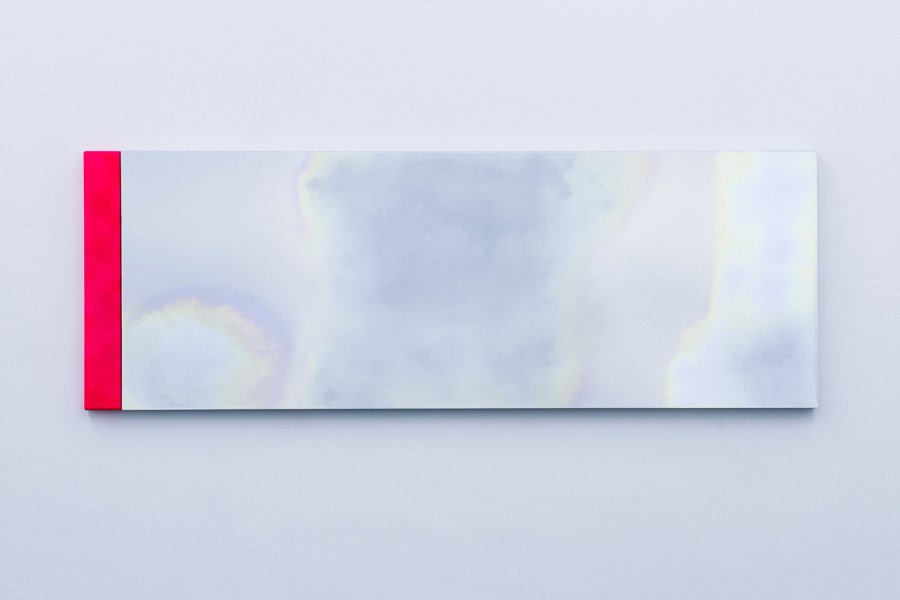 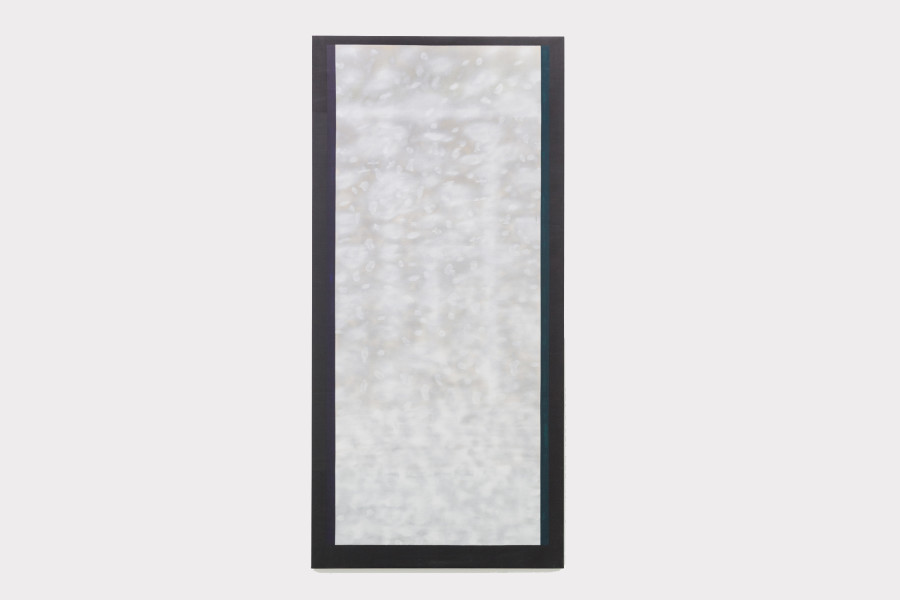 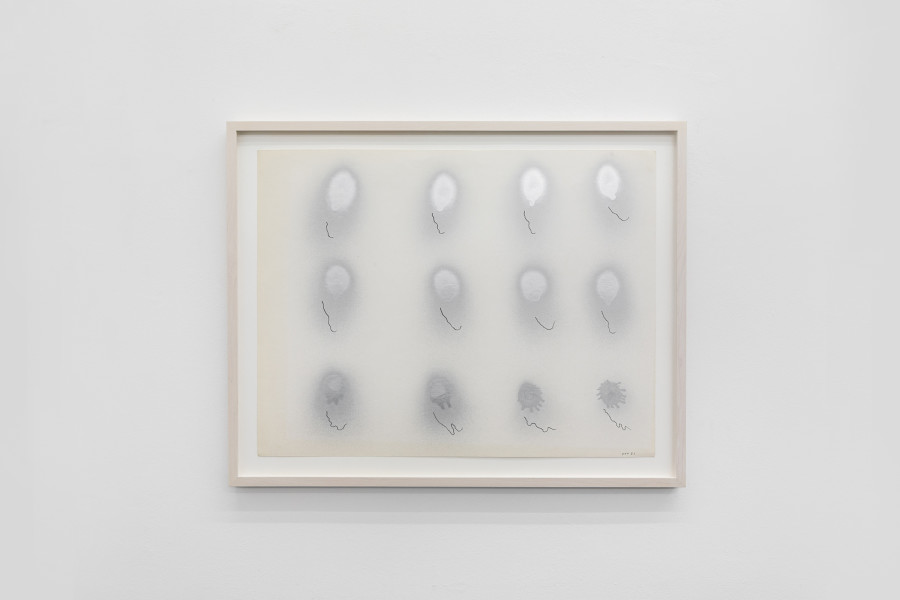 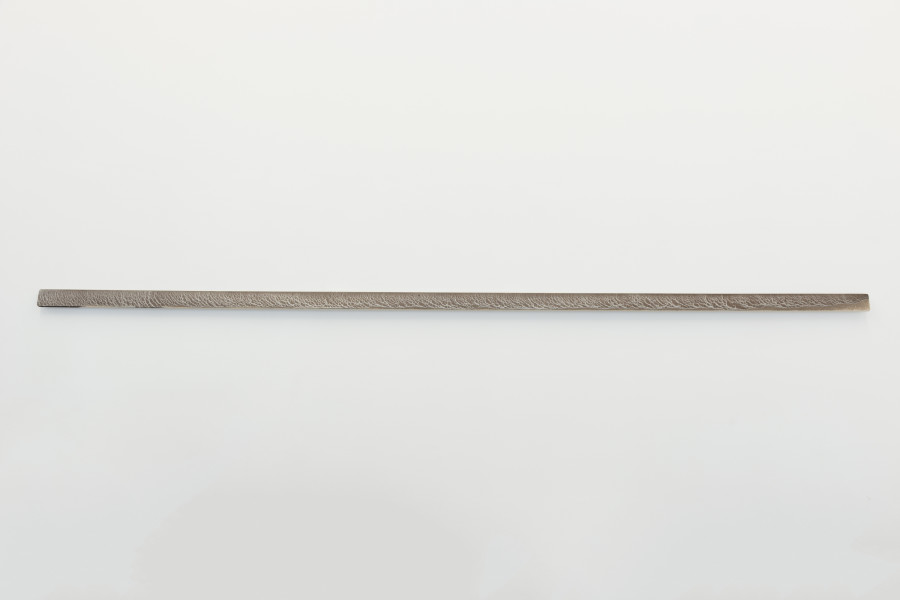 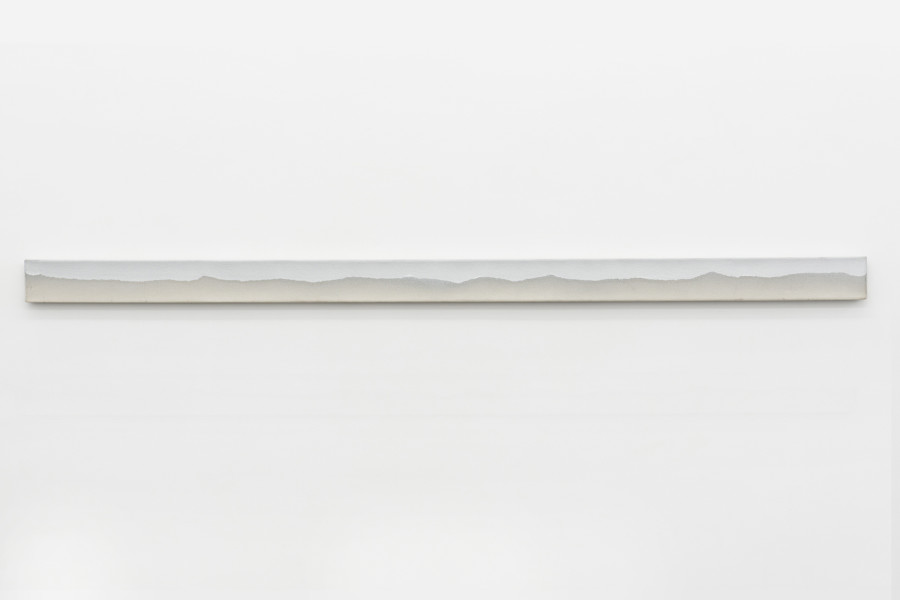 1935 born in Brooklyn, US
Studied art with Peter Busa at State University College of New York in Buffalo, US
lives and works in New York, US and Trevi, IT

Michael Venezia is widely considered to have played a major role in the renewal of painting in the 1960s. Back then, together with artist colleagues such as Dan Flavin, Robert Ryman, or Sol LeWitt, Venezia shared the opinion that routine and narcissism had become predominant in Abstract Expressionism, tendencies which they aimed to overcome and transcend. At the end of the 1960s Michael Venezia thus discovered the spray-paint gun as an adequate means to leave behind the gestural and handwritten touch of the brushstroke. Another important step was the reduction of the picture plane to a long narrow wooden bar. Until today, Venezia has remained faithful to this image format on which – by applying new techniques and combining several bars – he continues to achieve new and surprising painterly qualities.

Further information on the biography can be found here.

1957 born in Vienna, AT
lives and works in Vienna, AT
Since 1997 Brigitte Kowanz has been Professor at the University of Applied Arts, Vienna, AT. In 2009, she was awarded the Great Austrian State Prize for Fine Arts.

The main theme of Brigitte Kowanz’ works is the different visual forms which light can take. In addition to language, she uses light as an artistic means, capturing it in containers, distributing it over planes or forcing it into solid formations so that it is constantly taking on new shapes. Light thus becomes both a material and a metaphor in her search for new forms in which to represent visible reality.

Further information on the biography can be found here. 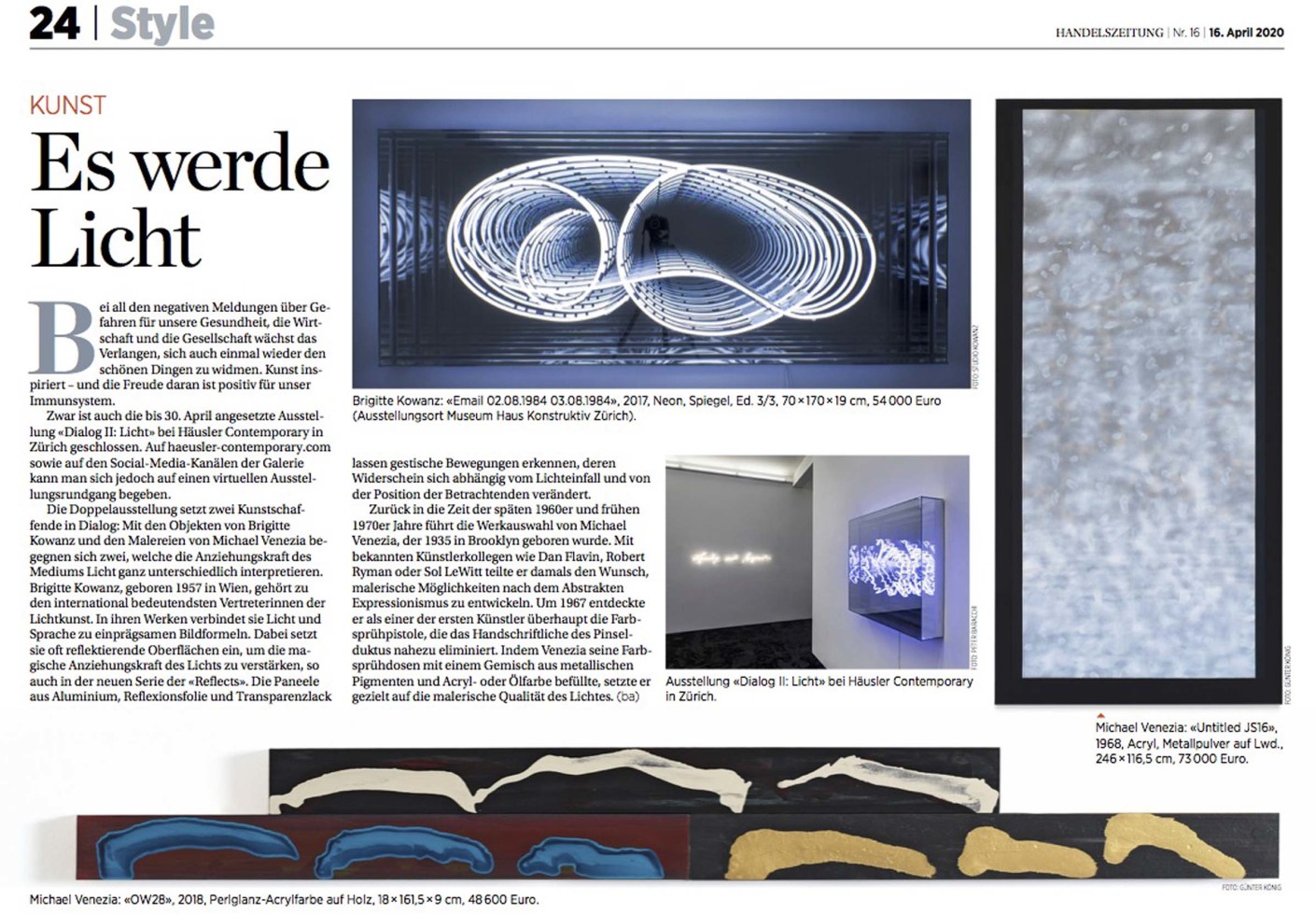